Про Церкву / About the Church 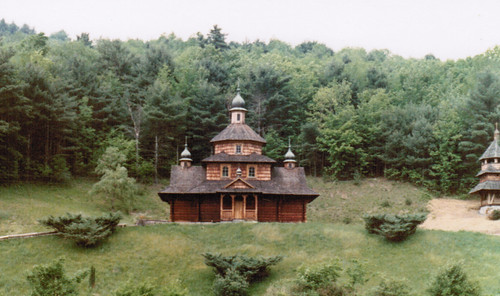 The ensemble of structures on St. John the Baptist Church grounds includes the church, belfry, gate, Grazhda (parish hall), and a parsonage. The construction of the church as well as other structures of the whole architectural complex was financed by Ukrainian post-World War II refugees and immigrants who realized the need for a tangible expression of their heritage and in the context of Soviet control of their country were constantly vigilant in the preservation and propagation of Ukrainian culture.

On August 14, 1960, John Kobziar, organized in his house on intersection of Route 17 and 23 A, a meeting of local Ukrainian-American residents and owners of properties in neighboring area. The group called themselves “Temporary Committee for the construction of the Ukrainian Catholic Chapel in the Vicinity of Hunter, N.Y.”. Minutes of third meeting of the “Temporary Committee…” chaired by John Kobziar and held in J. Kobziar’s tourist house “Xenia” in Jewett Center, indicate that the Committee, at its May 21, 1961 meeting, accepted design of the submitted sketch of a wooden chapel on the basis of which Jaroslaw Paladij, Temporary Committe’s treasurer, executed three dimensional model. Furthermore, at the same meeting, the Temporary Committee membership, joined by new member – Dr. Ivan Makarevych – proceed with (a) the election of Building Committee chaired by Dr. I. Makarevych, and (b) identification of the next steps in the construction of the chapel building.

In 1961, under the leadership and persevering guidance of Dr. Ivan Makarevych, who donated the land for this project, a group of enthusiasts of Ukrainian vernacular architecture and folk art and Hunter-area residents embarked upon the realization of the chapel building and related structures. Work on the entire ensemble of buildings proceeded in stages until its successful completion in the 1980s.

On the basis of sculptor Jaroslaw Paladij’s built preliminary scale model of the church, architect Ivan Zhukowsky drew up the necessary construction working drawings required for municipal government’s approval. Master carpenter Jurij Kostiw, who in his early years was trained by experienced carpenters in his native Bojko mountainous region of Ukraine in the art of building blockwork construction churches, became the master builder of the church. Proceeding with the church building project I. Kostiw disregarded Zhukovsky’s working drawings which called for a structure of steel beams, light frame construction using standardized dimensional lumber, vertical wood siding, etc. The subsequent structures of the St. John’s parish complex, for which architect Ivan Zajac developed design, were also executed by Jurij Kostiw. 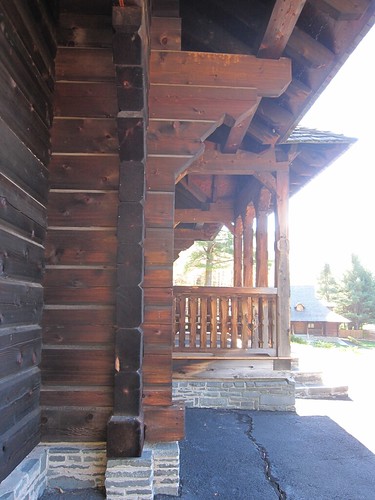 As the corner stone on the existing church building indicates the construction of the church was completed in 1962. The church building’s construction is executed in the traditional solid timber or log building (from German: blockwork or log contruction) style building technique of the Ukrainian Carpathian Mountain highlanders – the Hutsuls, the Lemkos and the Bojkos. It is a 61-foot-high tripartite (three-frame) structure, built of 7 1/2′ by 12″ cedar logs imported from British Columbia. The logs are laid horizontally one on top of the other and secured with wooden pegs and various other systems of corner-joinings.

Ukrainian wooden church structure can have three, five or nine compartments. To achieve greater spatial area separate compartments are built and then visually joined by very often intricately carved openings called prosvits. The three compartments of St. John the Baptist Church consist of a square nave joined to an apse (sanctuary) on one end, and a similarly smaller narthex on the opposite end. A choir loft is tucked above the narthex.

The height of the church is achieved by superimposing a somewhat narrower octagonal drum over the nave and then topping the eight-sided roof of the drum with a domed polygonal lantern.

In addition to the main entrance, there are two porticoed side entrances leading to the nave. Gabled roofs of the narthex, apse, and porticoes are topped with Baroque style lanterns. Around the perimeter of the church is a low overhanging skirt roof that sheds rainwater. It traditionally serves as protection against both rain and sun and creates a covered walkway. The overhanging roof is supported by the corner rims of massive consoles and the pillars of the porticoes. Except for a few side benches for the elderly and infirm, there are no pews in the church. In Ukraine, the congregation traditionally stood during services.

The Church Interior
The decoration of the interior of the church was executed by two prominent Ukrainian artists in the United States: Iconographer Petro Cholodny, Jr., and wood-carver/sculptor Mykhailo Chereshniowsky.

Other wood-carved items in the church include the altar, tabernacle, tetrapod, gospel stand, pulpit, processional cross, the grand lampadary, and frames for the icons on the sanctuary wall and elsewhere. All were carved in the same highly stylized and aesthetically beautiful fashion, thus coordinating every aspect of the interior decor into a unified whole. In accordance with Eastern Christian tradition, the interior of the church has an iconostasis – an altar screen with icons — that separates the apse from the nave. Its design in our church is very much personal expression of talented sculptor rather than one imbued in traditional vocabulary. The single-tiered, wood-carved iconostasis of St. John the Baptist Church, completed in 1964, spans the width of the apse and is divided into seven sections and includes the requisite three entranceways to the sanctuary: the double Royal Doors in the center, flanked by the single Deacon’s Doors. Above the center, is a wood-carved triangular arch. The artist employed many folk ornamental motifs and traditional religious symbols in his wood-carvings: endless meandering lines symbolizing eternity; volutes; solar (star-shaped) discs; square crosses; and wheat stalks and grape vines with clusters of grapes. The latter, highly symbolic of the Eucharist Sacrifice in the Christian Church, is also reminiscent of the tree-of-life folk-art motif. All of the wood-carvings were worked in sugar pine wood.

Although the number of icons in a church may vary, the subjects depicted, as well as their placements, are of a prescribed nature, adhering to rules that have been passed down by liturgical tradition. The church is decorated with two groups of icons: those that are set into the iconostasis, the wood-carved structure of the screen in front of the altar, and on the wall above the iconostasis; and those that grace the wall of the sanctuary behind the altar. Their arrangement is so masterful that, looking at them from the apse, they seem to flow together into a homogeneous icon wall. The icons are executed in the Byzantine style, but the artist, Petro Cholodny, Jr., has interpreted them in the Ukrainian iconographic tradition, enriching them with his own aesthetic taste and unique artistic expression.

Icons of the Annunciation and of the four Evangelists appear on the Royal Doors. On each side of the doors, on separate panels are depictions of the Savior, the Virgin Mary with Jesus, the patron saint of the Church (St. John the Baptist), and keeping with tradition, St. Nicholas. On the Deacon’s Doors are archangels, symbolizing the protection of the sanctuary. Above the Royal Doors, in the high triangular archway, is an icon of the Last Supper and above this, the Deisis (the Icon of Supplication) an enthroned Christ, flanked by his Mother, St. John the Baptist, and the twelve apostles. The sanctuary wall behind the altar has the icon of Our Lady Orans (Prayerful One).

The Bell Tower
In Ukrainian church architecture’s tall bell-tower is almost always a separate structure. Accordingly, the bell tower, designed and built by Jurij Kostiw, stands as a separate structure and is located on the right side of the entrance to the churchyard. In contrast to wooden church structures Ukrainian wooden bell towers are of timber-frame construction. The square, ground-level structure is open, with an interior staircase leading to an upper enclosed level and an octagonal arched gallery above it. It is topped with an eight-sided pyramidal roof, which reflects the style of the church roof, thus unifying the two structures compositionally. It houses a 2,000 pound bell from Italy and a second one from Holland. 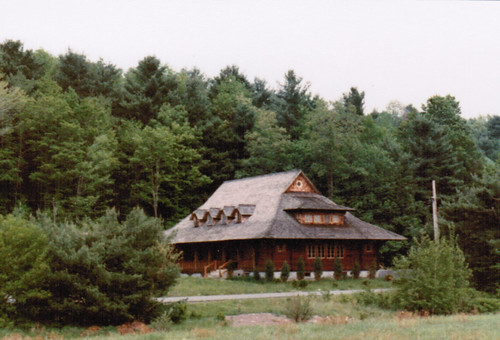 Parish Hall (“Grazhda”) and Parsonage
Both buildings are of blockwork construction in keeping with the stylistic uniformity of the whole complex. The parish hall was designed by architect Ivan Zajac in the style of a wealthy Hutsul home, its interior layout designed to serve as a parish hall.

The parsonage is used by a resident priest and has two apartments and all the modern conveniences of a contemporary home. Both structures were built by Jurij Kostiw.

9 Responses to Про Церкву / About the Church

This site uses Akismet to reduce spam. Learn how your comment data is processed.